Today I brewed my first beer with the new beer kit. It went well enough, although I learned a few things for next time that I can do better. Here's how it went.
First, I set up my new 33 quart turkey fryer on my porch by the pool. 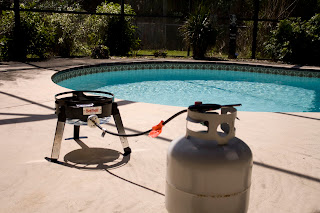 Next, I sanitized all relevant brewing equipment. I used Star-San that I bought online, and used my primary fermentation bucket to hold the sanitizer. 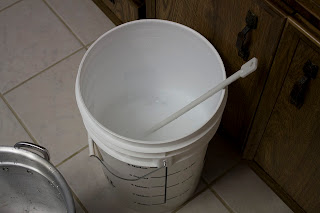 The recipe called for boiling 2.5 gallons of water to make the wort. There was a convenient 3 gallon mark in the turkey fryer pot, so I used 3 gallons instead. The instructions indicated that this would result in more hop flavor which I was OK with. I heated up the water to 160 degrees Fahrenheit and turned off the burner. The thermometer that came with the turkey fryer was within 5 degrees of the lab thermometer that came with my brewing kit, as was my IR thermometer. Once the water was heated, I turned off the burner and steeped the grains for 20 minutes. 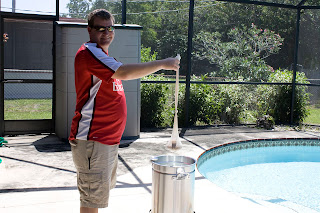 I left the burner off while the grains were steeping, watching the temperature to make sure it didn't drop below 150 degrees. 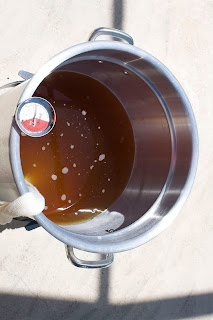 Next, I had to add the malt. I had a can of liquid malt extract and two bags of dried malt extract. I don't have any pictures of this since my photographer (my wife) was helping me stir as I added the malt. It was at this point that I had a boil over. I didn't think I'd have to worry about that since I had such a big pot, and I added a few drops of Fermcap to prevent this. I think I added it too early though so it had settled. It's probably a good thing that I had a boil over the first time - my wife stopped questioning my decision to buy the turkey frier instead of brewing in the kitchen! 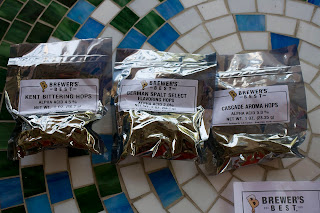 These were the hops varieties that the ingredients kit included. The bittering hops were added at the initial boil, the flavoring hops 40 minutes into the boil, and the aroma hops at 55 minutes into the hour boil. 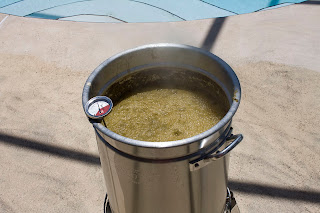 Once the boil was done, I carried the pot inside to chill in the sink with ice water. 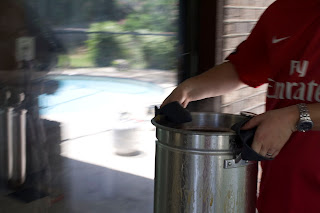 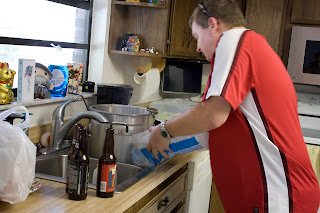 As it was chilling, I rehydrated the yeast. Once the wort was down to 75 degrees or so, I poured it into the fermenter and transfered the Star-San sanitizer to the bottling bucket for storage so I can reuse it later. 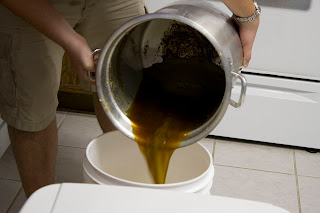 I then poured in the extra water I had boiled earlier to get the beer up to around 5 gallons. I didn't measure the volume directly but went based on the gravity of the beer. It ended up at 1.044 (I think - the hydrometer was hard to read with the foam) which was right in the middle of the expected range for my recipe of 1.046 - 1.042.

I poured in the now hydrated yeast and made a homemade swamp cooler with a cooler full of water, a fan, and an old undershirt to help keep fermentation temperatures down. We usually keep our A/C set to 80 to save money, and this setup looks like it's keeping everything in the low 70's. We'll see how well it works over time with the humid Florida air, but I'm hopeful. If I get serious about this hobby I may look into buying a small chest cooler and a temperature controller. 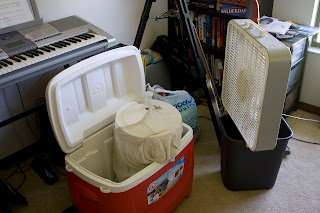 The airlock started bubbling within 20 minutes of pitching the yeast so now it's time to wait! I'm still undecided as to whether I want to do a secondary fermentation in my 5 gallon glass carboy. If not, I'll probably let it sit in the primary for 2 or 3 weeks then bottle.
Posted by realjd at 5:41 PM